To The Person Who Wondered If I Am Really Sick

As someone with the often invisible illness Idiopathic Arterial Hypertension (also known as PH,) I have had small incidents of strangers who have questioned the severity of my illness. I have had strangers question why I use an accessible parking spot. It really sucks trying to justify your illness (especially when it is life-threatening) to a stranger. It isn’t an easy thing to open up about, and often time these strangers aren’t asking you about whether you are disabled or not because they genuinely care about you. They are looking for validation. They want to be "right" about calling you out over a silly parking spot. Unfortunately, when you have an invisible illness this is bound to happen with strangers.

Recently I found out that someone I know asked if I was really sick. It felt like a punch to the gut. Life with an invisible and life threatening illness is so incredibility complicated and painful. I don’t understand how someone could question the validity of my illness. I figure if one person has questioned my illness, other people may have also wondered how serious it is, and how it impacts my life. Their comments made me feel extremely deserted.

I may look like a vibrant young woman who is just on the cusp of starting her adult life, but looks can be deceiving. Although I may not look ill, I have received a diagnosis. I have seen many specialists; I have gotten second opinions. My diagnosis shouldn’t be up for debate, but apparently it is. Pulmonary Hypertension is an invisible illness to the naked eye, but there are many indicators that I am sick to someone who understands the disease.

Majority of society doesn't know what signs and symptoms to look for to indicate that I have Pulmonary Hypertension. Mainstream media often depicts someone as being sick as looking pale, frail and bald. However, this isn't always the case for determining how serious an illness is. Many invisible illnesses can be well concealed, especially with the help of make up. Not only is my illness well hidden, but so is my disability. A symbol of someone in a wheelchair is often used for accessible parking spots and bathrooms, even though there are an array of different disabilities (including invisible ones.) Because of this, society weighs so heavily on being able to visibly see a disability in order to believe its validity. Regardless, there are still many different disabilities that do not require a wheelchair, or any visible medical equipment.

I can easily cover up how sick I am- to the point that many doctors ignored the fact that I was heart failure before being diagnosed. Pulmonary Hypertension isn't diagnosed through blood work. It is diagnosed through a process of elimination. For the person who doubts my illness, I can ensure you that I went through a plethora of invasive tests to receive a diagnosis.

At one point I had so much radiation exposure the technicians running the various x-ray, MRI and CT scans turned me down for another test, fearing it would be too dangerous. However, a specialist demanded that I had another CT scan, even though I had several in the past 24 hours, and even more in the last week and month leading up to my diagnosis. Dozens of vials of blood work was also ordered to rule out other underlining diseases, such as HIV.

The most invasive and effective procedure for diagnosing PH is called a Right Heart Catheter (which I had on Christmas Eve in 2013.) For this test, a tool is placed in a vein in either your groin or neck that leads to your heart. Mine was placed in my groin and the tool eventually made its way up to being directly in my heart to measure the pressure my pulmonary pressures. I was completely awake for this procedure, and was only given a small numbing in my leg. This test confirmed that I did indeed have a high pulmonary pressures, and I was officially diagnosed with Pulmonary Hypertension.

If you try to walk along side me, you may notice that I need to slow down, or may have to try and catch my breath while speaking. You might notice me gasping for air if we had to walk up a hill or some steps. People with PH are often out of breath by the time they reach the third step in a flight of stairs. I may look perfectly healthy, but I have a lung- heart disease. Those are two very vital organs that needed to do the most basic of tasks that are often taken for granted, such as going up the stairs, or bending down to tie your shoes.

Being short of breath was actually one of my first noticeable symptoms. I had my first symptom in Fall 2013. From there my symptoms progressed at an alarming rate. I was diagnosed quite quickly, as most people wait 2 years for a diagnosis. However, by the time I was diagnosed I was told that I was somewhere between a stage 3 and a stage 4.  Even though I was on the verge of dying, I still didn’t look sick to trained professionals (which delayed receiving a diagnosis before the progression of the disease kicked in.) If I didn’t received medical intervention when I did, I am not sure how much longer I would have lasted. In the weeks and days leading up to my hospitalization, I would wake up gasping for air. I had started to stop breathing in my sleep.

Pulmonary Hypertension doesn’t just make you short of breath; it narrows the arteries in your lungs. This makes it more difficult for oxygenated blood to be pumped throughout your body, causing an overloading in the heart as it desperately tries to pump blood. All this extra work causes heart failure. A symptom of PH is having an elevated heart rate- many people with PH experience a heart rate similar to someone who has run a marathon while doing a simple task; such as walking, or cleaning the house.  Many people with PH (like myself) also suffer from lower than normal oxygen saturations and dyspnea. Having low oxygen satuations also causes someone to tire very quickly because of how hard their body must work to accommodate.  Perhaps these aren’t visible symptoms, but that shouldn’t make the seriousness of an illness illegitimate. These symptoms are serious, and can escalate the progression of the disease, and can lead to organ damage and failure. 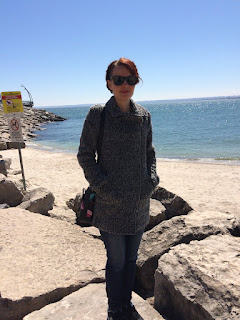 There is a huge difference between whether someone looks sick, and whether someone is sick. Just because someone looks healthy, that shouldn't dismiss their diagnosis nor their symptoms. I can only assume that the uninformed comment about whether I was sick or not was influenced by how I appear on social media. My Instagram account is largely photos of cafes I visit, my dog, my boyfriend and little adventures I go on. Although having a life threatening illness dictates how I live my life, it does not define me as a person. I don't want to document my illness too heavily on social media. As such, I don't include many pictures of me at the hospital (although I do include them from time to time to help raise awareness for PH.) I also don't include many pictures of me wearing oxygen, or taking medications. I don't want people to pity me, or assume I am trying to get attention through my illness. Social media is also a great way to edit your life; you can only show what you chose to share. I may have a picture of me on a hill smiling, but that doesn't mean I wasn't gasping for breath, and had to take breaks to get there.  For me, I only capture what I want to remember, and what I want my friends and family to remember.

After my diagnosis I was so terrified to enjoy moments in life. I was scared that if I laughed or smiled, that would mean that I was okay with what was happening. Now it seems like I have to be afraid to laugh or smile because of how other people will perceive that. I have my bad symptoms days where I am extremely short of breath, and become even more physically limited. I spend hours each month waiting in waiting rooms of hospitals and blood labs. I also spend hours each month commuting to specialists appointments. I often feel ill as a side effect of the medications I am on. These medications are not elective, I also do not great a break from taking them. I must take them everyday like clock work. There are currently no treatment options that will cure the disease I have. The medication I have will only slow down the progression of the disease, but unfortunately, it is still considered fatal. It is difficult being in my 20's and knowing that I have a fatal illness. I am at an age where I am watching more and more of my friends get married, travel, start careers and have children. I was diagnosed several months after starting a career job, and I loved working. I was saving up to move out of my parent's house. I worked with children throughout university and received a specialization in education. To think that I am faking this disease is ludicrous.

To the anyone who isn't sure if I am ill; please consider that not all illnesses are visible from afar. Sometimes illnesses are very easy to mask with make-up, or to filter out through social media. Just because an illness or disability is not visible does not mean that it cannot be serious or life threatening. Its visibility should not equate to its validity.
Posted by Unknown at 19:30