My journey with IPAH started nearly 27 years ago. I was about 4 months pregnant and went to the doctors as I was feeling breathless. This was my third baby. I never had breathlessness with my other two pregnancies.

I was given two inhalers for asthma.I started taking them regularly. I was then at Antenatal Clinic, and the lady I was seeing there told me that I was very breathless. I said "yes, I have asthma." She asked me when was I told that I had asthma. I said about three weeks ago..she asked if I would mind going for an ecg. At this time I was also going through a messy divorce, and my husband at the time had the girls. I was living with a new partner. I had the ecg and went home.

I shortly recieved a phone call telling me to pack a bag and get straight to hospital. I went to the hospital so scared out of my mind. I was then seen by a doctor who said he thought that I had blood clots on the lungs, but would test me in the morning. I was admitted for two weeks to get stabilized. The following morning I was seen by two doctors and had lung function tests. I couldn't have X ray due to being pregnant. They had a meeting and then came to see me in the afternoon. They suspected blood clots on the lungs and told me to consider a termination. I couldn't go through with that because I had lost a baby at 6 months prior between my two girls. I went ahead with the pregnancy. I had to give my self three injections of Heperin daily. The baby was born with no complications.

It was not until two days after that the vicar came in to read me the last rites. My blood pressure had plummeted through the floor. I was on constant oxygen and bed rest. Some how I must of had someone looking over me because I made it. Once my little baby was three months old I went to a chest hospital in London, England. I had numerous tests and was told that I had PH. I was put on Warfarin, Propafenone, and Nicardipine. No real PH drugs were available at the time. I was seen by this hospital every three months. During this time with PH I had many bad days, and with a new baby and two daughters it was very hard work. I had alot of support from my friends and family, which is good if you have PH. I got very depressed and shut my self away for three months of not going out etc. One day I got up and said to my self "Come on Karen, get out of this rut" and to this day I havent looked back, now only forward.

I was sent to Hammersmith hospital 14 years ago and that was the best thing ever. I was admitted for a week for full lots of tests and met some wonderful people. All the doctors and nurses in the Hammersmith PH team are fantastic. With the right medications like Bosentan, Sildenafil, Digoxin, and 8 liters of oxygen over night I have been good . I have recently been put on Macitentan and its brilliant so far. I had previously suffered with severe SVT's which is where I was taken to the local A&E and given Adenisone to stop them. Once the drug never worked and I had to have a cardio version. At hammersmith they sorted this problem out with having a heart ablation twice.

My daughter is nearly 27 and a beautiful young lady I must say.I have two grandsons who keep me going, and a wonderful husband who gives me such a lot of support and does a lot for me. I had a nasty partner before him.


I am quoted at being class 3 IPAH. I was told 20 years ago that I had 5 years left to live. No one can tell you how long you got to live. I have learnt that having IPAH you have to pace your self in life. This may make people laugh but at times I get very scared, especially at night time. I think my heart is not going. So I sit up and get my stethescope out and listen to my heart. My husband asks me "what you doing?" I say I am making sure my heart is going lol. I know its mad, but I like to hear it. I also check my oxygen sats too. You have to remain positive and be strong during your PH journey.
Posted by Unknown at 06:00 No comments:

*I want to start this entry by stating that I am not a doctor or a nutritionist. If you have any questions about whether it is safe for you to incorporate something into your lifestyle or diet, please consult your doctor. 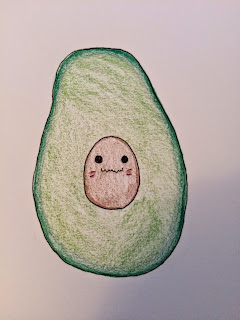 When tackling your health, it is important to approach your health as as a whole. I have Pulmonary Hypertension, so each day I take my prescribed medication in order to take care of myself. However, in order to care for my entire well being there are special steps that I take to ensure that whatever part of my body can function at its optimal state will function at its best. There are things that I eat, holistic supplements that I take, alternative treatments that I practice and special treats I allow myself in order to ensure that this happens. I would like to start sharing what I do in addition to taking my PH medication each day- and today I want to talk about avocados.

Most of you have probably heard of the saying "an apple a day keeps the doctor away." Perhaps there are other foods that deserve to be included in this old English proverb. Maybe an avocado a day keeps the doctor away? Avocados contain many nutrients, including 20 different vitamins and minerals. (One of those vitamins is vitamin K, which you have to be careful with if you on a medication like blood thinners.) Avocados are filled with heart healthy fats. Majority of the fat content in an avocado is from oleic acid (also known as omega-9.) Diets rich in oleic acid has been known to improve insulin sensitivity and blood circulation. It has also been linked to reducing inflammation.

Studies show that avocados can help offer protection against certain types of cancers. They are also very heart healthy because of the good fats and vitamins they contain. Avocados are quite high in fat (good fat,) so you may want to have a smaller portion if you are trying to lose weight, (or have to divide your vitamin K intake among other vegetables)

It 2014 a study hypothesized that the protein found in 'good cholesterol' may be the key to treating Pulmonary Hypertension. HDL (which contains protein apoA-1) is often referred to as a "good cholesterol" that can reduce help oxidized lipids. Oxidized lipids play a key role in inflaming blood vessels and hardening arteries. Avocado isn't a miracle vegetable (...er, I guess I mean fruit because of its one giant seed,) but it may help contribute to good health.

Avocados are an acquired taste. Chances are if you had sushi, you have had avocado before. If you do not like the taste of avocado, it is easily disguised when prepared with other food. Avocado slices can be added to your sandwich, or they can be mashed and used as a spread. I have my avocado everyday in a fruit smoothie. I use it to replace dairy for making my fruit smoothie creamy and thick. Lots of recipes are available for free online (although avocados themselves can be fairly pricey  if living outside of where they are grown.)

New to avocados? Not sure how to cut them? View the video below:

The knife in the video looks intimidating- it looks as if it could help you take down wild plants in the rain forest. If your avocado is ripe you can get away with using a more reasonably sized knife. You will still want the knife to be fairly sharp in order to remove the pit from the center.